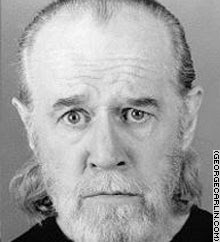 Not surprised, but still saddened when I read this headline:

June 23 (Bloomberg) -- George Carlin, an American comedian who scrapped an early career as a variety-show humorist to become a Grammy-winning font of countercultural, profanity-filled black humor, died in California. He was 71.

Carlin gained prominence in the 1970s with stand-up routines such as ``The Seven Words You Can Never Say on TV,'' which landed him in a Milwaukee jail. According to a timeline on the comedian's Web site, he was arrested for ``using indecent language in front of wheelchair-bound children.''

The subject of Carlin's routine in 1978 reached the U.S. Supreme Court, which ruled that the Federal Communications Commission had the power to prohibit stations from airing profanities when children may be able to hear them (edited for length. For the full story go to http://www.bloomberg.com/apps/news?pid=20601103&sid=aoLc5tOswmRI&refer=us).

Carlin spent a lifetime Thinking, Drinking (and drugs), and Being Merry.

Here a few of my favorite Carnin Lines:

Always do whatever's next.

Atheism is a non-prophet organization.

By and large, language is a tool for concealing the truth.

Death is caused by swallowing small amounts of saliva over a long period of time.


I have as much authority as the Pope, I just don't have as many people who believe it.


I was thinking about how people seem to read the Bible a whole lot more as they get older; then it dawned on me - they're cramming for their final exam.

I went to a bookstore and asked the saleswoman, "Where's the self-help section?" She said if she told me, it would defeat the purpose.

If it's true that our species is alone in the universe, then I'd have to say the universe aimed rather low and settled for very little.

I'm always relieved when someone is delivering a eulogy and I realize I'm listening to it.


Not this time, George.