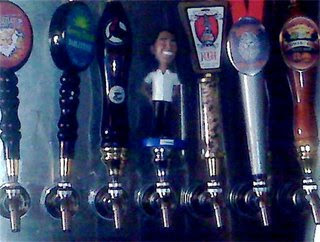 Earlier this year, Sixpoint Craft Ales announced the release of the "Hop Obama" ale in both New York State and Massachusetts. Supporters of the democratic process can hoist a glass of this limited-edition beer that was brewed in tribute to the inspiration that has been Senator Barack Obama's presidential campaign.

Though I've not seen it, the beer is supposed to be available in finer bars and restaurants for a very limited time throughout both states.

Yesterday I read some news (probably old news) that is good news for all Reds and Blues:

DENVER, Colorado - The flex-fuel vehicles at this summer's Democratic National Convention will be running on waste beer, thanks to the Molson Coors Brewing Company.

Molson Coors, along with its U.S. subsidiary, Coors Brewing Company, will be the Official E85 Ethanol Producer for the convention, which is set for August 25 through 28 in Denver.

Molson Coors is donating all the clean-burning ethanol fuel for the fleet of 400 General Motors flex-fuel vehicles to be used for the convention's transportation needs. The fleet will be for the use of U.S. House and Senate Leadership, DNC officials and state party chairs, delegates, staff, and members of the media.

All the buses and motorpool vehicles are flex-fuel, hybrids or run on biofuel, the DNC Host Committee says.

It is made from waste beer – not the aftermath of consumption – but, generated at the Golden, Colorado, brewery, which now produces about three million gallons annually. Coors is the first major U.S. brewer to convert its waste beer into ethanol. (From Environmental News Service)

If you're caught speeding, is that “Waste makes haste?”