Guy Fawkes Night on the fifth of November, in the UK, is variously called Fireworks Night or Bonfire Night. 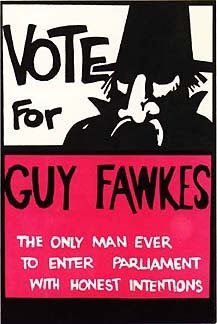 An Act of Parliament was passed to appoint 5 November in each year as a day of thanksgiving for "the joyful day of deliverance" from the Gun Powder Conspiracy, of which Guido ( Guy ) Fawkes was the explosives expert, and the one caught ready to light the fuse.

The Gunpowder Conspiracy of 1605,or Gunpowder Plot, as it was known at the time, was a failed assassination attempt by a group of provincial English Catholics against King James I of England and VI of Scotland. The plot intended to kill the king, his family, and most of the Protestant aristocracy in a single attack by blowing up the Houses of Parliament during the State Opening on 5 November 1605.

It is still the custom in Britain on 5 November to let off fireworks. Traditionally, in the weeks running up to the 5th, children would make "guys" — effigies supposedly of Fawkes — usually formed from old clothes stuffed with newspaper, and equipped with a grotesque mask, to be burnt on the 5 November bonfire. These effigies would be exhibited in the street to collect money for fireworks. This practice is, however, becoming increasingly rare. The word guy came thus in the 19th century to mean a weirdly dressed person, and hence in the 20th and 21st centuries to mean any male person. Latterly "guys" of George W Bush, Bin Laden or any disliked politician of the day have been used as effigies.

Institutions and towns hold firework displays and bonfire parties, and the same is done on a smaller scale in back gardens throughout the country. In some areas, particularly in Sussex, there are extensive processions, large bonfires and firework displays organised by local bonfire societies.

The Houses of Parliament are still searched by the Yeomen of the Guard ( Beefeaters ) before the State Opening, which, since 1928, has been held in November. Ostensibly to ensure no latter-day Guy Fawkes is concealed in the cellars, this is retained as a picturesque custom rather than a serious anti-terrorist precaution. It is said that for superstitious reasons no State Opening will be held on 5 November, but this is untrue: for instance, the State Opening was held on 5 November in 1957.

The cellar in which Fawkes watched over his gunpowder was demolished in 1822. The area was further damaged in the 1834 fire and destroyed in the subsequent rebuilding of the Palace of Westminster. The lantern Guy Fawkes carried in 1605 is in the Ashmolean Museum, Oxford. A key supposed to have been taken from him is in Speaker's House, Palace of Westminster.
Over the years a common myth was perpetrated that the explosives and the positioning of them would have failed to harm anybody if they had have been let off.
To find out a British television show, recreated the Gunpowder Plot.
First aired in 2005, this £1 million programme centred around a reconstruction of the Houses of Parliament as they were in 1605 (the current ones had not yet been built at the time of the Gunpowder Plot), constructed using period equivalent methods wherever possible. This was stocked with mannequins to represent notable commoners, members and the king before the bomb was detonated.

The first hurdle to overcome was the actual recreation of the 17th century Houses of Parliament. As the buildings were demolished to expand the current structures, Simon Carter, the Parliamentary Curator provided drawings of the original structures for the recreated structure to utilise using 650 tonnes of concrete. Explosives expert Dr. Sidney Alford helped to determine that thirty-six barrels containing one metric tonne of gunpowder were used in the plot. Alford further proved that the "decayed" powder was classified as such because it was unsuitable for infantry use, but could still detonate.

The dramatic experiment, conducted on a test site, proved unambiguously that the explosion would have at the very least, killed all those attending the State Opening of Parliament in the Lords chamber, including - according to historical consultant Justin Pollard - King James I and VI of Scotland, the Archbishop Bancroft, Lord Northampton and the English philosopher, Francis Bacon.

The power of the explosion, which surprised even gunpowder experts, was such that seven-foot deep solid concrete walls (made deliberately to replicate how archives suggest the walls in the old House of Lords were constructed) were reduced to rubble.
Measuring devices placed in the chamber to calculate the force of the blast were themselves destroyed by the blast, while the skull of the mannequin representing King James, which had been placed on a throne inside the chamber surrounded by courtiers, peers and bishops, was found a large distance away from the site. According to the findings of the programme, no-one within 100 metres of the blast would have survived, while all the stained glass windows in Westminster Abbey would have been shattered, as would all windows within a large distance of the palace.
The power of the explosion would have been heard at least five miles away, and seen from many more. Even if only half the gunpowder had gone off, everyone in the House of Lords and its environs would have been killed instantly. The blast would have been mostly directed upward, raining debris in a 200 meter radius.
So Tonight enjoy your bonfires, where ever you might be, watch the sparks fly into the dark blue Fall air, ooohh and ahhhh at the fireworks, and chow down on your Buttered baked potatoes, fresh from the embers, and raise a glass of beer to Murderous schemes being thwarted, and calamity on those, from any country, who think them up..... while those in the New World Colonies, will probably like to celebrate a new dawn for America.....and the symbolic burning of the failed "Old Guard "
Sir Dayvd ( the naughty Crackerjack lighter ) of Oxfordshire.
Posted by dkWells