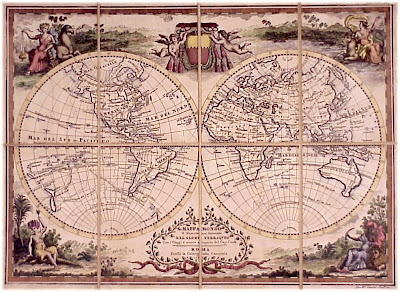 “Maps are central to the human experience... In many ways, the history of maps and mapmaking is the history of human society.”
-- The World Through Maps by John Rennnie Short


I’ve been working with our graphic artist here at work to create a logo for a new client. The first “direction” we were given was to include, in some way, a world map – perhaps even a treasure map.

The process has got me thinking a lot about hidden treasures and creating. Not too long ago, we had my family over to my house for dinner; one of the things I did to keep people occupied was hide a dozen our so items throughout the neighborhood and handed out a “treasure map” complete with landmarks, hints, and GPS coordinates. One child and a couple of childlike-adults enjoyed the search for hidden trinkets.

There are a couple of popular global “treasure hunt.” One is called Geocaching, which involves finding hidden caches/treasure by use of a GPS. There is also a similar game called Letterboxing that involves clues just as starting at a point and walking x# paces to a landmark. Both ways are great for not only finding the prize, but also finding new locations you never knew existed or landmarks you’ve seen a thousand times but never really stopped to take notice. Some are deep in the woods, some are right out in the open near a busy road. In both cases, it helps to have with you one of the greatest inventions in the world -- the magnetic compass. If it’s not the greatest invention that changed the world, it’s certainly the one that heralded a revolution in medieval mapmaking and exploration.

Creative Knights, too, need good maps and a compass to navigate our daily world. Without clear directions, we’d be lost with no direction known (like a rolling stone) and creative ideas would just stay lost in the mental world of uncharted waters. Without a compass to give us some clear direction, how do we know if we’re heading in the right direction, if not running around in circles?

When creating whatever it is we Knights create, it’s fun to be given some directions and start out hunting. Of course, it’s also exciting and necessary to go out and explore beyond the known mapped limits of the universe (or imaginations). How else does the unknown become known and, well, mapped? Or, asked a different way, how else does a new idea get on the map?