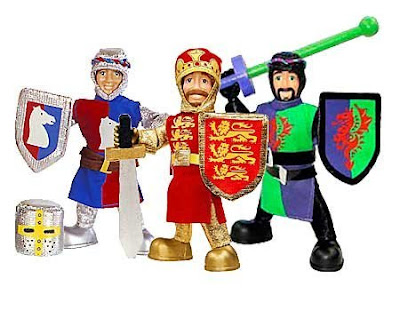 Sir Dayvd, Sir Hook and Sir Bowie in Their Youth
It's a very KMSA thing that Sir Bowie did in his Blog "Hidden Treasures"; November 17th, that of taking up a 'challenge' and being 'baffled'.
Those who take up a challenge are described as having "entered the lists", but the expression doesn't refer to a name being added to a roll of competitors.  The "lists" in question were the practice alleys at the side of the medieval jousting arenas where knights would wait to enter the fray.  The name comes from the old German "lista"-meaning a strip or boarder.
Once a competitor was in the lists, there was no turning back without disgrace, and this is where a knight would be baffled.
As a word "baffle" has come a long way from its original meaning-to publicly humiliate someone through mockery and a bit of good old-fashioned GBH (grievous bodily harm).
The word derived from an attempt to represent the sound of blows delivered to a disgraced knight, who would have been strung up by his heels and battered about with axe handles by his peers.  When released, the dazed miscreant would have been confused and disoriented, hence the usage today.
With such rules you knew where you stood in those honourable times.  The ancient code of chivalry dictated that no knight could refuse another hospitality for as long as required, and then just as now, there was always some comedian out to milk such a rule for all it was worth.
If the indolent knight showed no signs of moving on, the host could hint it was time to go by giving him a cold shoulder of mutton-food normally reserved for castle staff.  And that's why we still give the cold shoulder to those we dislike.
Sir Dayvd (the semantically challenged) of Oxfordshire
Posted by dkWells