Yes, it's that time again when I make the half-mile journey to the Newburgh Presbyterian Church overlooking the Ohio River to cast my vote. Sir Bowie, Lady Suzanne and Lady Allwinky have already voted early. But I on the other hand, being the contradictory traditionalist (that means I'm traditional when I choose to be) believe in voting on November 4.

There are; however, other Americans who see the right to vote as a sacred-naked honor. Like these nudist from Land-O-Lakes, Florida. Yes, they make butter there, but I don't want to know how! Here's their bargument as published by the AP. 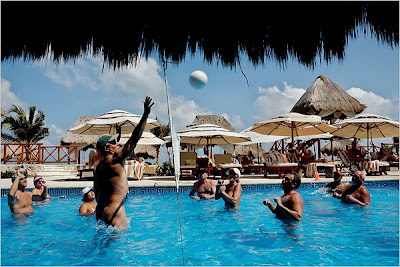 Nothing in state law would prohibit it, but the supervisor of elections says he is opposed to creating any new precincts before redistricting in 2010.

This brings a whole new meaning to the concept of "Polls". You would have to be very careful about which "lever" you pull. And speaking of hanging "Chads", I bet there are a few of those there! Can't you just see a desperate candidate agreeing to "stump" there?! Perhaps this is the concept of democracy that we need to bring to the Middle-East. I'm sure the Taliban would receive nude voting with open minds!

I personally don't have a problem with it, but its like my son observed when I took him to a nude beach on St. Marteen, "Dad, how come the only people who are nude are ugly?" That's when I proceeded to tell him about the rules of the nude beach. Rule #1 being, don't walk around on a nude beach smoking a cigar if it's bigger than your johnson.

Oh well, enough of this mindless chatter. It's time to vote for a half-breed, black man with a Muslim name for President!