A Matter of Survival 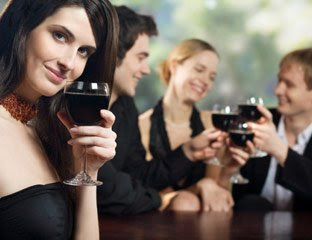 Without alcohol, how would man ever breed??
I am delighted to find that the Committee of Advertising Practice has got absolutely nothing more important to think about than whether or not there should be bald men in booze commercials.  There should, it turns out.
A poster for Lambrini sparkling wine has been rapped for depicting a group of women attracting a handsome young fellow, thereby suggesting that the drink may bring sexual/social success.   The CAP would advise that the men in the picture should be unattractive, overweight, middle-aged, balding, etc.  But that would be nonsensical.  If a woman wanted to seduce a fat, bald, old man,  you wouldn't need to get him drunk first.
The wine company immediately challenged the CAP's idea of beauty, asking, "Are Jack Nicholson and Sean Connery unattractive to women?"  Well, yes, frankly, and I've never understood the conspiracy which claims they aren't.  Jack Nicholson is a raddled, lecherous, sexually incontinent old horror; and going to bed with Sean Connery would be, as said by many a young English gal, like shagging Father Christmas.  (I await the Lady's opinion on all of this.)
If I were the owners of Lambrini, I would have taken issue with the more fundamental point made by CAP, whose new code insists that; "Links must not be made between alcohol and seduction, sexual activity or sexual success."  Now that really is Big Brother.  The link between alcohol and seduction is absolutely undeniable.
I have conducted my own small survey among friends and colleagues, and discovered that a telling 100 percent of respondents first kissed their current partner while drunk.  they first went to bed with them, it transpires, while only "quite tipsy", but first said they loved them when "totally insensible on booze."  It makes you wonder how people in the United Arab Emirates ever manage to breed?
Sir Dayvd (Doing his bit for the Human Race) of Oxfordshire
Posted by dkWells